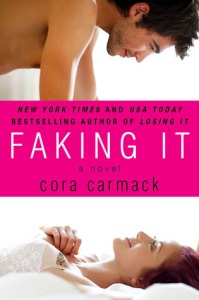 Now, I just had to figure out what to tell my parents about my suddenly absent library-going-nice-guy-boyfriend. I’d just have to tell them he had to work or go to class or heal the sick or something. I scanned the room for an open table. They’d probably see right through the lie and know there was no nice guy, but there was no way around it. Damn. The coffee shop was packed, and there weren’t any open tables. There was a four top with only one guy sitting at it, and it looked like he was almost done. He had short, brown curls that had been tamed into something neat and clean. He was gorgeous, in that all-American model kind of way. He wore a sweater and scarf and had a book sitting on his table. Newsflash! This was the kind of guy libraries should use in advertising if they wanted more people to read.

Cade is working to get over the one who got away

“Golden Boy nickname aside, I’m not a saint, Max.” His body was stiff next to mine. I rubbed at my eyes, and slowly the world started to resurface. I was in my bed. In my apartment. Light filtered in through the window, and Cade was sitting on my bed, fully clothed, staring at the wall like it was Hitler. Oh holy Hell, I was dreaming. I’d just put the moves on him in my sleep! I covered my mouth with my hand and racked my brain to try to remember if I’d said anything that would give me away. When the shock wore off, I let my hand drop to my chest, where my fingertips touched bare skin. I looked down and had to resist the urge to scream. I WAS NAKED.

When deceptions begin to go to far, feeling get involved

As they fight their inner demons as well as the odds

One word would describe Max and Cade’s relationship… COMPLICATED

I gave this book 4.3 out of 5 stars. I have to say in this book my favorite character would have to be Cade, which is funny because I tend to always love the bad boy (Max and I have that in common). However Cade was able to swoop in and steal my heart (swoon), the thing I think that gets me the most about him is the way he almost always understands Max and what she’s not saying. I spent a greater part of this book jealous the he wasn’t real/mine. The coolest thing about this book in my opinion is the fact that the storyline wasn’t a typical romance storyline. The guy was the one who was seen as the ‘Golden Boy’ and the girl was the one who was edgy and mysterious. For me Max projected the girl that all girls want to be, strong and fearless, but on the inside she was just as scared and uncertain of herself as the rest of us if not more. As she began to trust and rely on Cade more she was able to face her inner turmoil and strive to be who she always wanted to be. This is the second book in the Losing It series and does have some ties to the first book but you won’t be lost if you start with this book.

One thought on “Faking it (Losing it #2) by Cora Carmack”