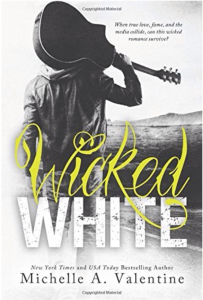 It was lonely growing up as a foster child, bouncing from place to place- never really having a steady home. I never had time to make friends, not real ones anyway. That’s what led me to music. It was the one constant in my life. The one thing no one could ever take away from me. I spent most of my youth alone in my room, learning to play every instrument known to man. Focusing on something other than the fact that my real mother didn’t want me anymore seemed to keep me out of trouble.

Ace isn’t your typical rockstar, he learned from experience that people (for the most part) aren’t to be trusted. He has been betrayed or taken advantage of all his life (there are exceptions) and when the one person who has always been there for him, needs him he leaves everything to be there.

Her green eyes focus on my face as if she’s attempting to figure me out, and she holds out the keys to me. ‘Welcome to the neighborhood, Mister…’ ‘Johnson, Ace Johnson.’ I tell her my real name, not the one I’m known to the world by, but don’t offer a smile. I have to resist her allure no matter how nice she is to me. When I don’t go into any more details about myself, she says, ‘Come on. Let’s get that paperwork done.’ As soon as I fill out the form, I give Iris eight hundred dollars in cash and walk out of the office. I can tell she believes I’m an asshole, and I hate that things have to be that way, because she seems nice, but it’s best for both of us if we don’t get involved. The crazy life I lead would chew up and spit out a nice little country bumpkin like Iris.

Iris is a small (tiny) town girl and her grandmother’s just died. She goes back home to get her affairs in order and finds more (responsibilities) than she was prepared for. Throw in a mysterious new hottie… I mean stranger and things just got interesting.

I gave this book a 3.2 out of 5 stars. I felt that this story was pretty good but there were some parts that bothered me. One of the main things I didn’t like was toward the end, there were certain problems that Ace and Iris faced (no I will not tell you what) and I felt that it was a bit too rushed. I did really like Ace until various things happened (he mishandled some situations) but he was really cool and I could connect with him better than the typical male lead. I didn’t really connect with Iris like I expected to, not saying that she was a bad character but I didn’t connect to her on the level I hoped. One of my favorite things about this book is that the story is told from both perspectives, so while I didn’t always agree with what was happening- I knew what went into making said decision. This was a standalone, so don’t worry about cliffhangers.